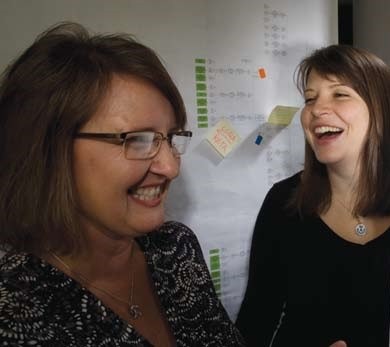 One of our nation’s founding fathers, Thomas Jefferson, often referred to the term “good government.” Jefferson believed that government should be judged by how well it meets legitimate objectives. Legitimate objectives—a broad statement of what an organization chooses to accomplish—can be defined by how well that organization performs its mission.

In 2005, the California Department of Transportation (Caltrans) began to develop a digital tool to automate cooperative agreements. While Caltrans originally designed the Project Agreement Construction Tool (PACT) to improve a process riddled with delays, PACT exceeded this objective by changing a statewide process, ultimately saving time, money and resources—which by anyone’s standard defines an act of good government.

“We used to assemble new cooperative agreements by pulling language from more than 40 different templates from past agreements,” said Robinson. “So someone would say, ‘Oh, this template sounds like my project, and I’m going to be doing some of the work on this project, and we have a mix of this kind of money so I need template E4.’ They would cut and paste different templates together to make it fit their project. The difficulty was that some of those templates were developed as early as 1992 and had not been maintained very well.”

Unlike the previous process where each project development team essentially started from the beginning with each new agreement, PACT guides users through a series of standard questions with standard multiple-choice answers and assembles pre-approved contract language based on the users’ answers. A well-prepared team can create a cooperative agreement with PACT in as little as two hours. “If you can answer all of the required questions in the PACT program using the answers provided you can walk out of a meeting with an approvable agreement,” said Robinson.

“The idea for PACT started when we had a meeting and someone said, ‘I just did my federal taxes on TurboTax®. Cooperative agreements can’t be more complicated than taxes,” said Robinson. “PACT is a fancy TurboTax-like tool. It gives you a format for the type of answer you can provide to each question and assembles the agreement as you go through the questions.”

Drilling down on the questions and devising the language for the answers required the expertise of CCE, who brought in an instructional designer and a technical writer to help with the task. They painstakingly reviewed of all the language used in the outdated templates, analyzed its meaning, and designed questions to guide the user in order to create the programming logic for PACT.

A Change in Process

“Before PACT, we read every agreement statewide from beginning to end every time it was submitted—an average of four submittals per agreement,” said Robinson. “Today, we only have to focus on any custom language that a project development team adds to the pre-approved PACT language. “We rewrote all of the language in plain English—not legalese, engineer-speak or Caltrans-ese. It’s more approachable and positive for our project development teams.”

That change means a lot to Susan Miller, projects director for the Contra Costa Transportation Authority. “PACT did a good job of putting Caltrans and the local agencies on more equal footing in the agreements. Now there’s a feeling of ‘We are partners in this project and here’s how we’re going to get it done,’” said Miller, who points to the mutual indemnification articles as an example. “This area always gave us some heart-burn in the past because the old articles only protected Caltrans. The new language also protects the local agencies so in terms of making the playing field level, PACT was a really good move.”

The consistency of each agreement encourages PACT users. “I like the idea that if I have the same inputs I will get similar outputs with PACT, which we couldn’t say was the case in the past,” said Trichelle Suntrapak, coopera-tive agreement coordinator, District 6 (Fresno), Caltrans. “Before PACT we didn’t have any control over what we might come up with on every project. I can now tell my customers and stakeholders what product they can expect to have and why we’re using this particular language, policies and procedures, which are all now standardized. It’s just so much more efficient.”

Suntrapak is so impressed by PACT that she believes other state agencies should consider its adoption. “A lot of opportunity is yet to be realized with this amazing program,” she said. “It’s not a pie-in-the-sky or wishful-thinking application. PACT is the kind of program that we often expect out of private industry only it has come out of the public sector. It’s a total best practice.”

This article originally appeared in the Fall 2008 issue of Access Magazine. It has been edited for length and clarity. Article written by Michelle Gamble-Risley.