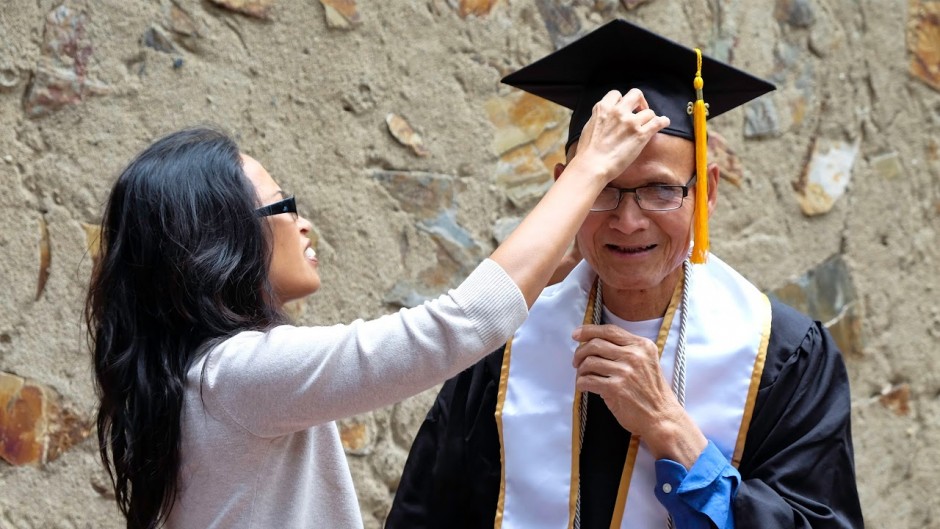 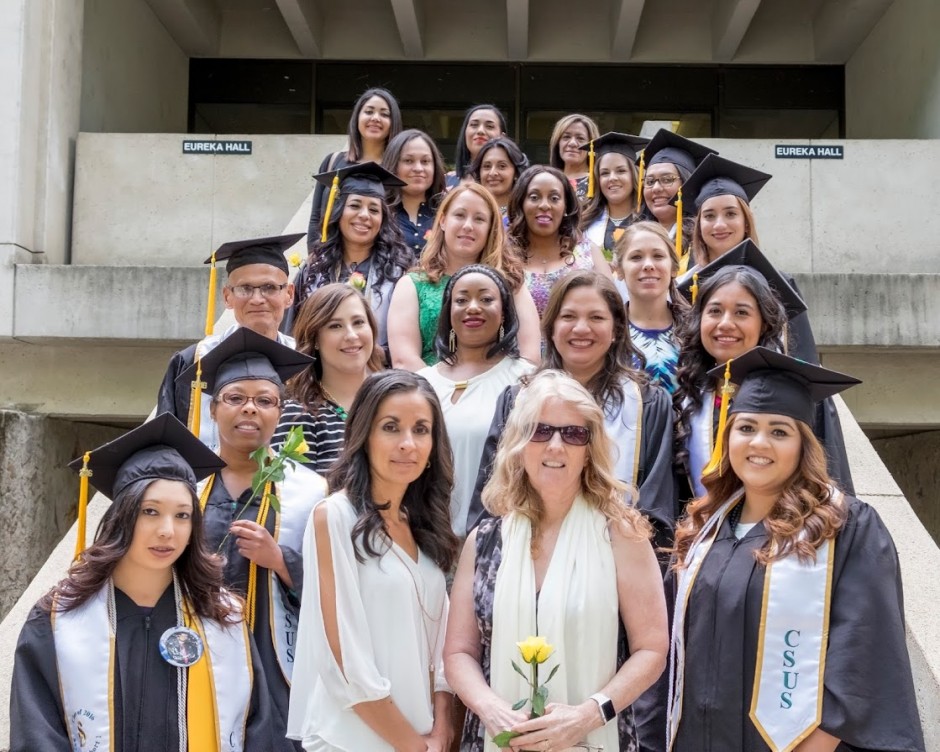 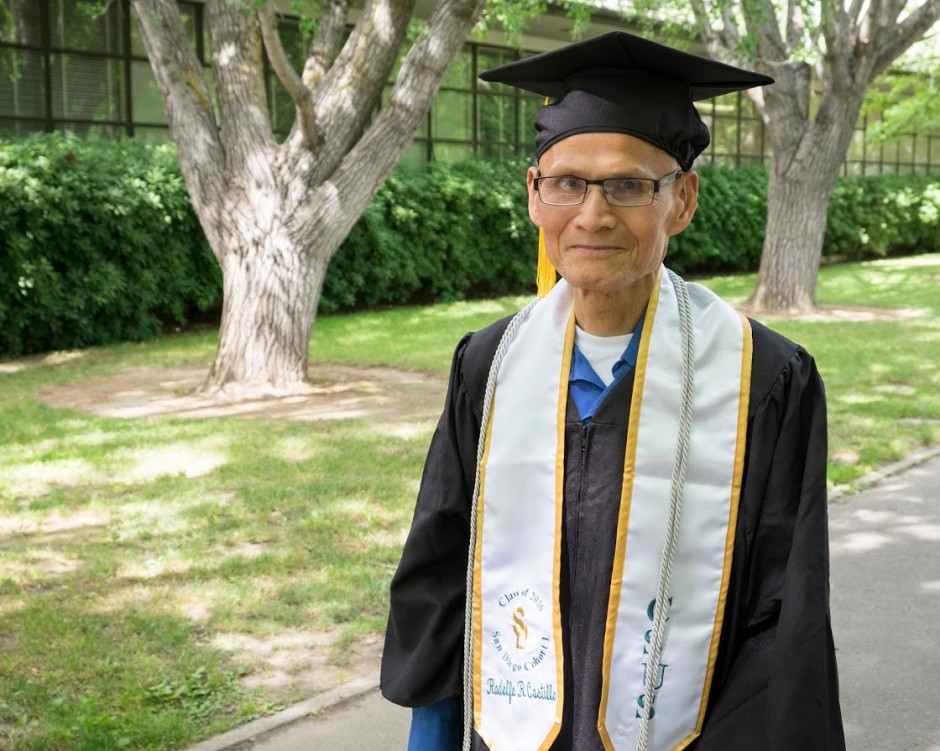 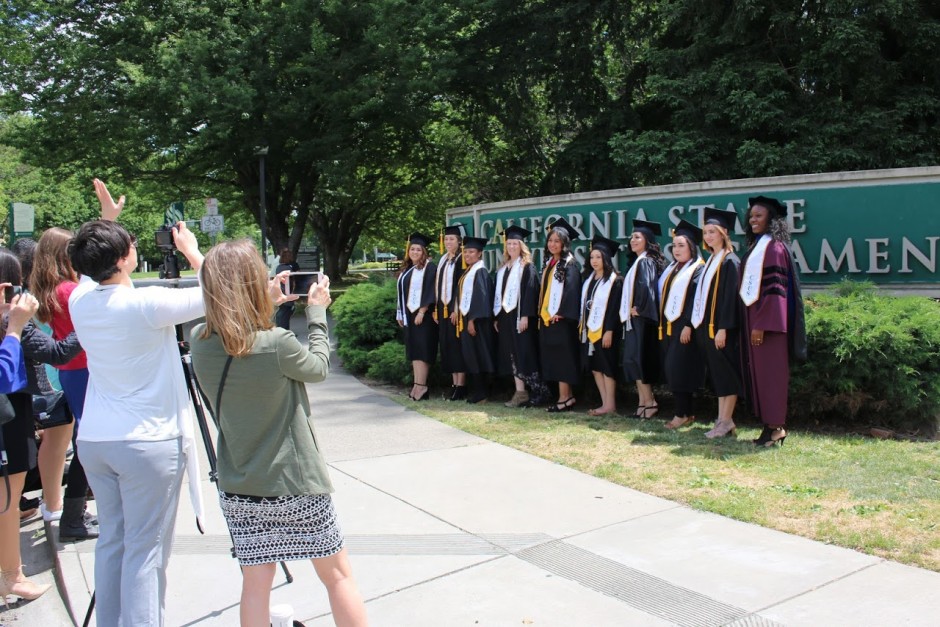 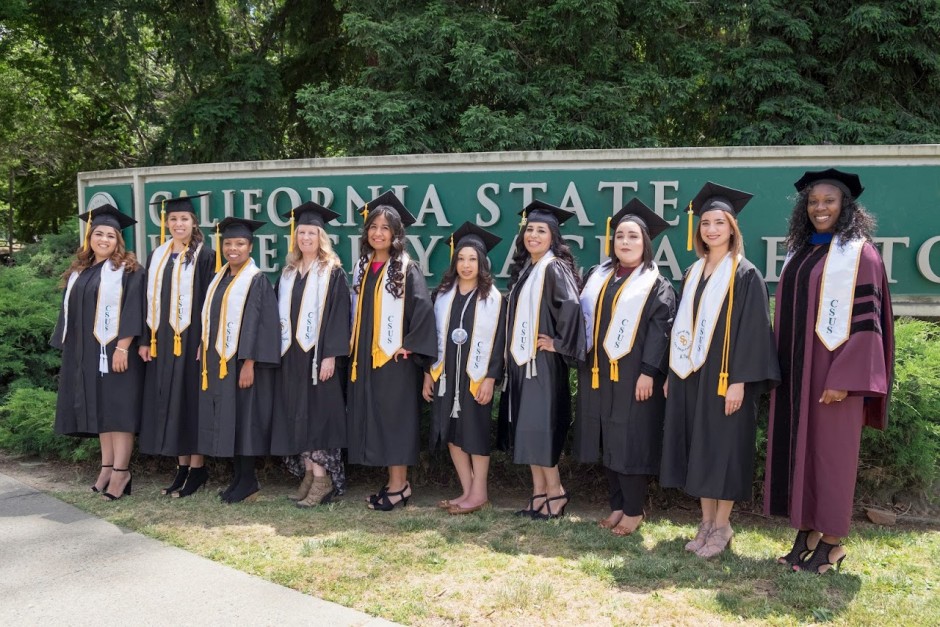 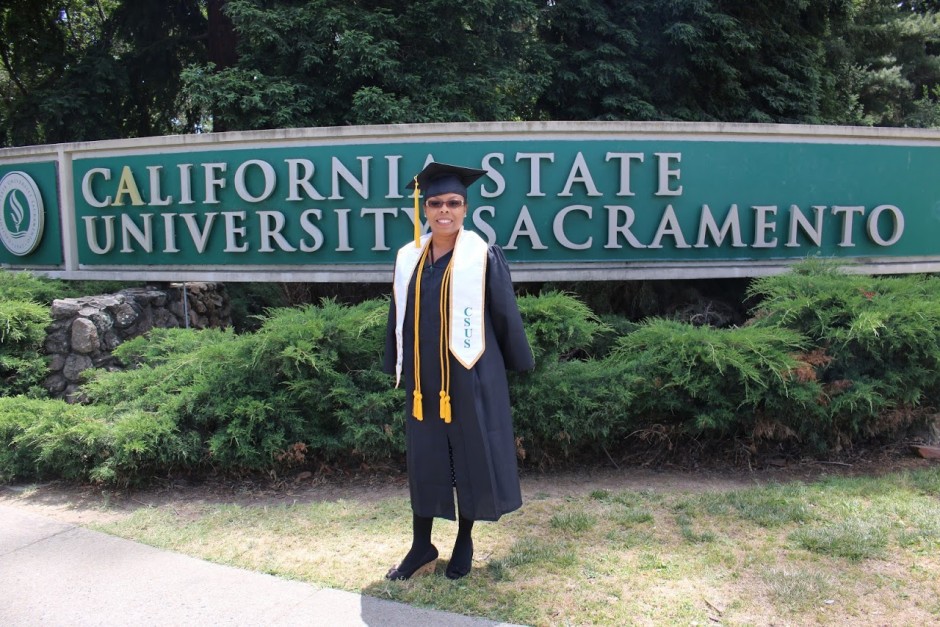 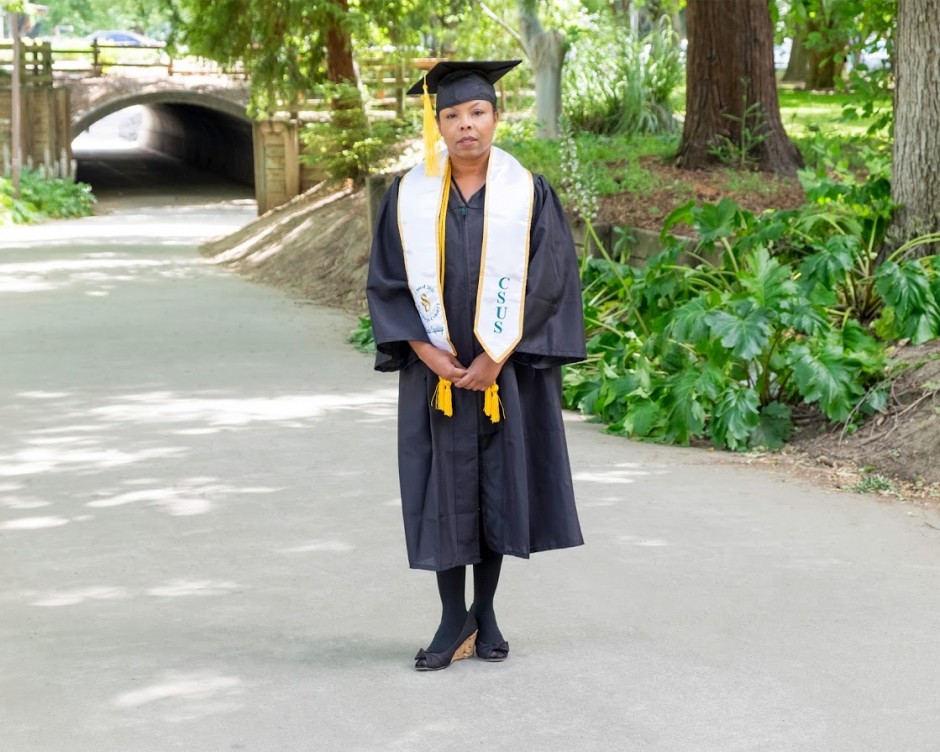 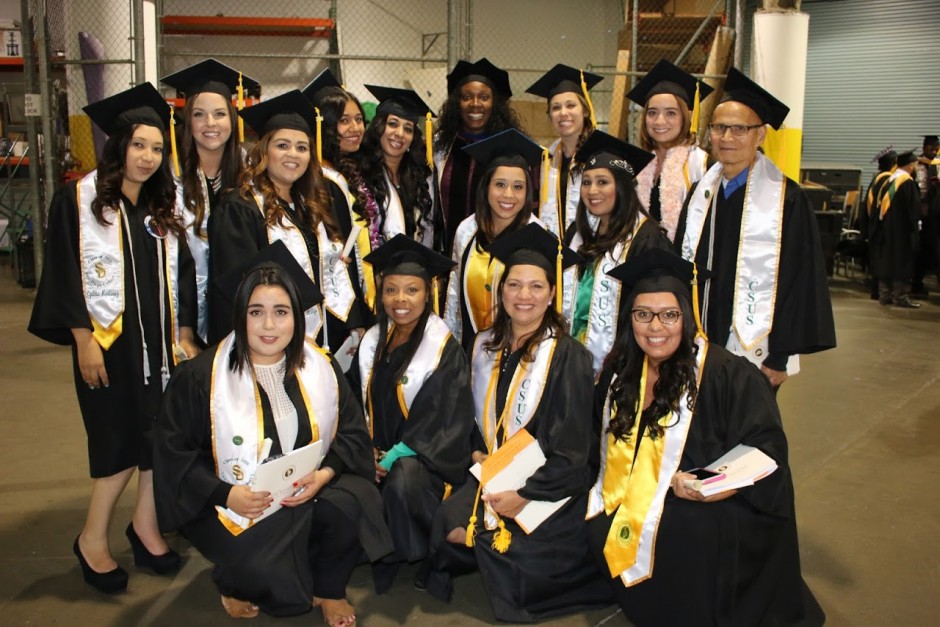 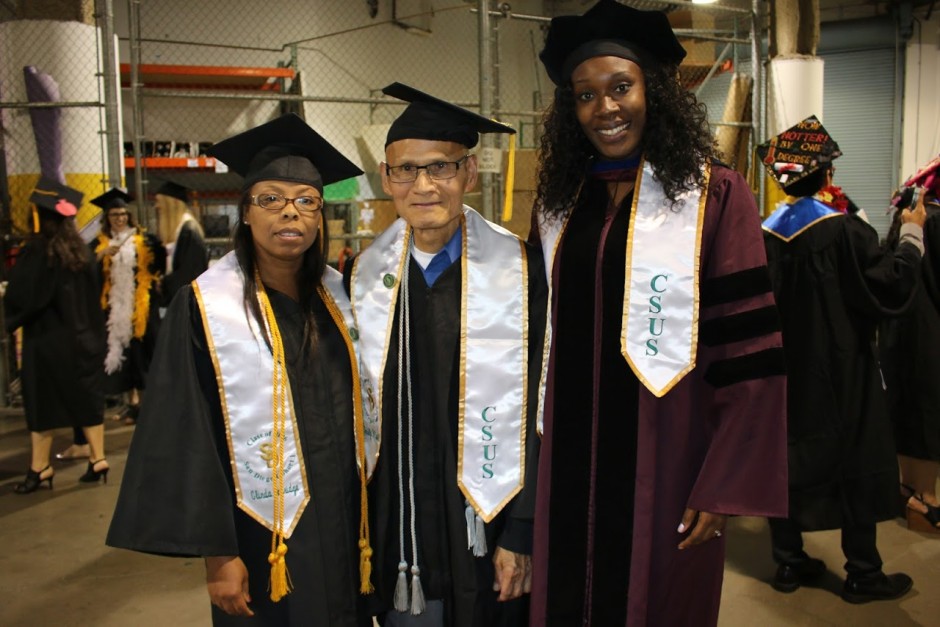 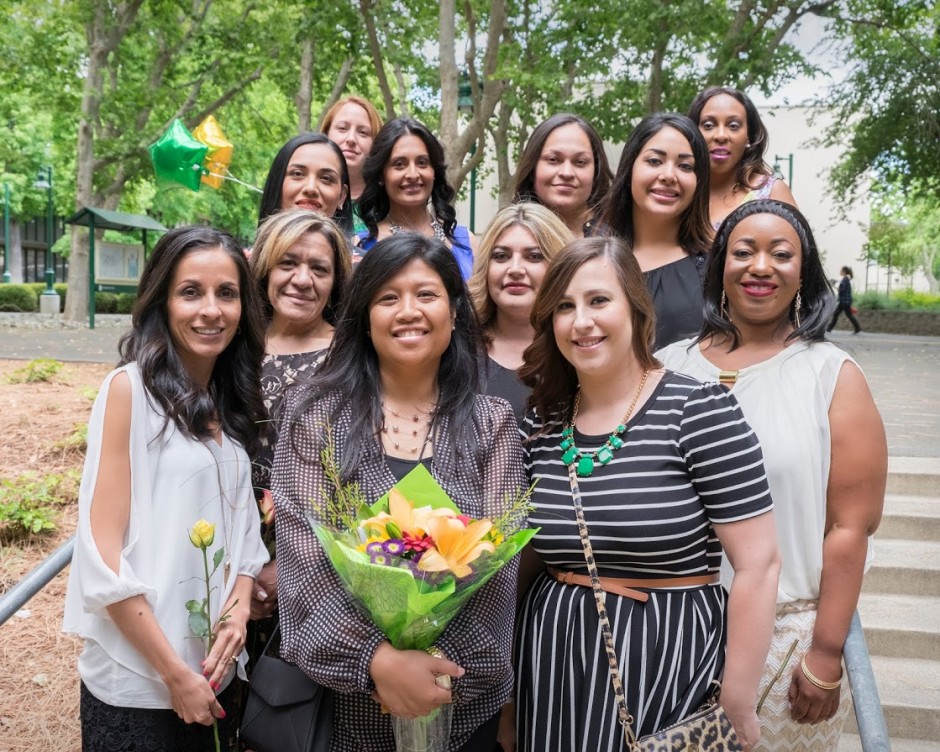 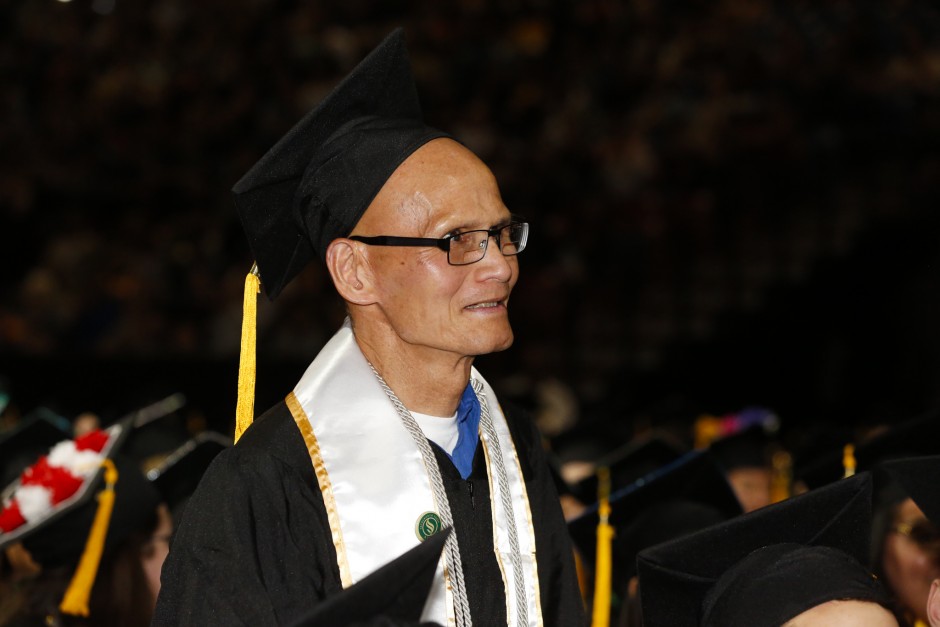 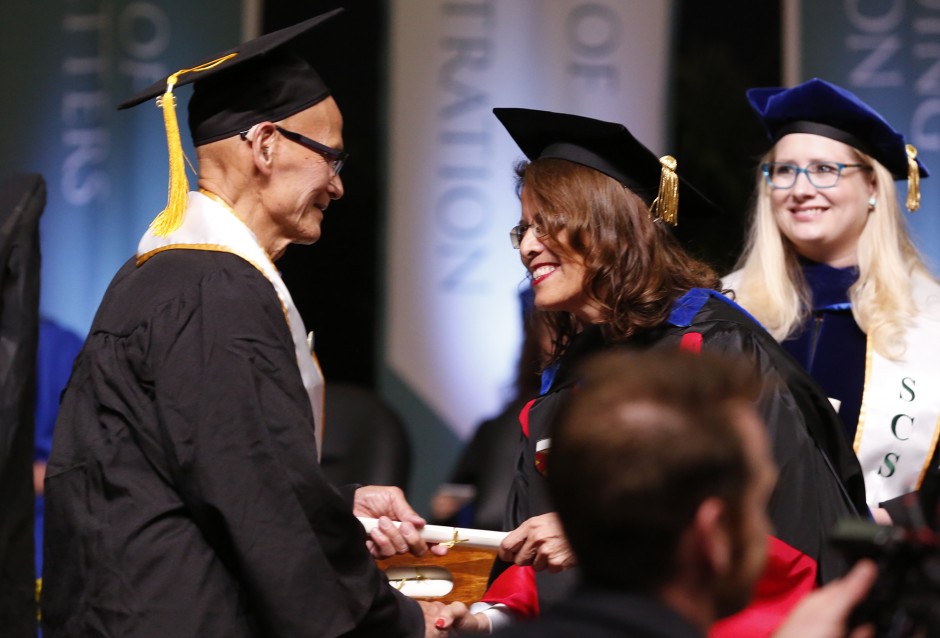 Rodolfo Castillo: 75 Years in the Making Oldest Student in Class of 2016 Graduates with Honors

Sacramento State President Robert S. Nelsen provided a letter of support as part of the nomination process, and in it, he called Mr. Castillo an inspiration and ”the personification of what it means to fight for your dreams and persevere through challenges.”

As he went about his custodial duties Rodolfo Castillo noticed the preschool teachers, how they taught a lesson and held a four-year-old’s attention, how they comforted a child in need and nurtured self-control. “I want to study what they’re doing,” he said to himself, “and I want to do the same thing.”

He knew he had a lifetime of experience as an immigrant, an English language learner, and a U.S. Navy veteran. And he knew he could give them something extra in the way of “fatherly advice and a grandfather’s advice, too,” Castillo said.

“exemplifies everything that is important and good about immigration” – Sacramento State President Robert S. Nelsen

This father of four and grandfather of six enrolled in a long-distance degree program through Sacramento State, which he completed while living and working in San Diego. In fact, just hours before the commencement ceremony, Castillo stepped foot on the Sac State campus for the first time. “It will be a wonderful moment for our family when he crosses that stage,” said his daughter Eleonor Castillo. Along with Eleonor, Castillo’s wife, youngest son and a grandson flew to Sacramento for the ceremony.

“Mr. Rodolfo Castillo is from the Philippines and he joined the U.S. Navy during the Vietnam War,” Nelsen explained. “Mr. Rudy, as the children call him, is from San Diego…and for the last three years he’s been working in an elementary school during the day while taking classes at night at age 75.”

Castillo, as the oldest graduate in Sac State’s Class of 2016, plans to teach preschool for another five years, and as an immigrant “exemplifies everything that is important and good about immigration,” Nelsen said.

Castillo left behind an impoverished life in the Philippines and by serving in the navy, he became eligible for U.S. citizenship. During his tour of duty he survived a gun battle off Vietnam and “discrimination in the armed forces,” with menial jobs doled out because of his skin color, said Castillo.

Yet he endured, says Eleonor, because “like other immigrants, my parents came to this country with hope.”

After a 28-year career in the navy and not yet ready to retire, Castillo applied for a job in the San Diego Unified School District, where he started as a custodian. In 2007, he earned an associate degree at a community college and was welcomed aboard as a preschool teacher.

“I give them warm affection just like a parent,” he says, and his wife Elvira agrees he’s good with children. “He’s so mellow. He sits with them and he cares for them. It makes a difference.”

Yet teaching opportunities were passing him by because the Head Start program started requiring a bachelor’s degree of preschool applicants. So Castillo, in his 70s, went back to school to earn one.

“Rudy has done extremely well redefining how we can achieve our dreams.” – Professor Idara Essien-Wood

“It was a challenging journey for him,” said his daughter Eleonor, who has taught in elementary school all the way up to college. Age wasn’t the only potential barrier for her father, so was language.

English is his second language and Tagalog his first. Castillo remembered how the academic writing was “too rigorous and difficult to do” in the beginning. “I read things three or four times so it will stay in my brain.” Some nights he only got a few hours of sleep, staying up late doing homework.

On a particularly challenging assignment Castillo confided to his daughter, “I’m so old. I can’t do this.” And just as she’s done with her college students, Eleonor coached him through his research and writing. “You have to do it,” she encouraged him, “but you’ll find a way to do it differently.”

She didn’t give him the answers either, but flipped the situation around and asked him, teacher-to-teacher: “What do you say to a child who is frustrated?”

“If Mr. Rudy could do it, I could do it.” – Classmate Glinda Copridge

Child development professor Idara Essien-Wood taught the classes in San Diego, supplementing the videotaped lectures by Sac State faculty. Castillo’s immigrant journey “is beyond beautiful,” she says. “Rudy has done extremely well redefining how we can achieve our dreams,” describing him as “a compassionate and loving person and very welcoming. Kids feel that.”

A classmate, Glinda Copridge, worked in the same school district as Castillo. “We don’t have many men teachers and he’s quite effective in the class,” she says. “Children really listen to Mr. Rudy. They find him interesting like a grandfather figure.”

Castillo is at least 30 to 45 years older than everyone else in the class, and Copridge would sometimes remind herself, ”If Mr. Rudy could do it, I could do it.”

Earning a college degree was truly a family affair. Castillo’s wife earned her nursing degree years ago. Their two sons graduated from West Point, one of their daughters from Point Loma Nazarene University, and Eleonor is working on her doctoral degree in education policy at the University of Maryland. Castillo completed the circle as the final member of the family to earn a bachelor’s degree.

Reflecting on her father’s accomplishment, Eleonor said, “Children come first in the Filipino culture… and my parents sacrificed to get us through college.” Now, he can finally say, “It’s my time.”