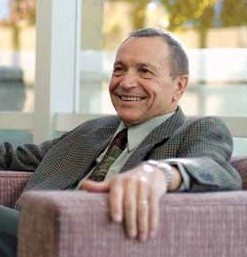 Born and raised in Dortmund, Germany, an industrial mining city destroyed in World War II, Ulrich “Ulli” Luenemann developed a strong sense of wanderlust at a very young age. As a young adult, he pursued military service as his ticket to freedom and volunteered with the German Luftwaffe (air force). “I’m like Top Gun, I have a need for speed,” says Luenemann. Flying ﬁghter jets across Europe and the United States furthered his passion for world travel.

Transitioning from student to teacher, Luenemann became an instructor pilot and while in ﬂight camp befriended a Sacramento native. “In Christmas of 1968, I met an American pilot during training. We became friends, and he told me so many great things about Sacramento,” he says. The friendship continued even after Luenemann returned to Germany to pursue a college education and ultimately led to his current career as a lecturer with the Sac State Communication Studies Department.

“I have three bachelor’s degrees and two master’s degrees,” says Luenemann. “I liked to move around a lot and having a student visa allowed me to stay in different countries for longer periods of time.” After earning bachelor’s degrees in sociology and world history in Germany he moved to Canada to ﬁnish his international relations degree before pursuing a master’s in political science.

His work with the College of Continuing Education puts his intercultural skills to good use, especially when students have trouble with local customs. “One of my students was caught sunbathing nude on the roof of a local building and I’ve had other students who think it’s natural to urinate in public,” says Luenemann, whose sense of humor turns these incidents into teachable moments.

“You can’t be a well-rounded person until you experience other cultures,” explains Luenemann who has visited 104 countries with no signs of stopping. “India, Tibet and Peru are my plans for 2011. I think the more international exposure you get, the more you learn about yourself.”